The finalists in this year’s Ahuwhenua Young Māori Farmer Award for Sheep and Beef have been announced.

Kristy Maria Roa, Ngāti Maniapoto, Ngāti Apakura. Kristy works as a shepherd on Iwinui Station near Tolaga Bay on the East Coast of the North Island.

Tumoanakotore-i-Whakairioratia Harrison-Boyd, Ngati Porou, Whanau a Tuwhakairiora me Te Whanau a Hinekehu. Tu is a shepherd at Whareopaia Station near Tolaga Bay on the East Coast.

The three were selected from a number of entrants from around the country. Kristy Roa, 20, is a city girl who grew up in Hamilton and whose parents have no direct connections to farming although they own an engineering business that builds milk tankers for Fonterra.

At school, Kristy studied the normal school subjects. She was planning to go overseas when she left and work on a horse ranch in Canada. But by chance she heard about the farm cadet course run by Waipaoa Cadet Training Trust on the East Coast. Just driving there through the farmland to an open day to check out Waipaoa suddenly inspired her to make agriculture her career choice. She gained some experience for a few months on farms in the Waikato and was accepted into the two-year course. While she loves the outdoor life, it’s the business aspect of farming that is a major attraction. She says many city kids see farming as a lifestyle, whereas she sees the business dimension which she describes as ‘pretty cool’.

Kristy Roa works as a shepherd on Iwinui Station (Hauiti Corporation) near Tolaga Bay – a 2,100 hectare property that runs 5,300 ewes, 3,700 ewe lambs, 450 cows and 1,000 trading bulls. This is her first job out of Waipaoa but her long-term goal is to manage a large-scale sheep and beef farm in the Gisborne area and one day own her own farm. 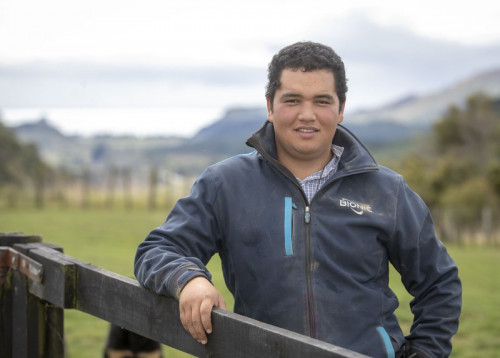 Tumoanakotore, or Tu as he’s known, has always been interested in farming dating back to his early school days. At secondary school he joined the NZ Trades Academy programme which saw him get three days a week on-farm experience in Year 12 and 13. At one of the farms he met up with two shepherds who were graduates from Smedley Cadet Training Farm in Central Hawke’s Bay. Tu completed the two year programme at Smedley then went on to do a Diploma in Agriculture and a Diploma in Farm Management at Lincoln University. While at Lincoln he was selected as a Tri- Lamb young leader and travelled to Australia and the USA to see how their sheep industry is run and how to better our relationship with them.

After completing these two courses, he did some casual farm work before taking a job as a shepherd about a year ago at Whareopaia Station near Tolaga Bay on the East Coast.

The 1,000 hectare (815 effective) property runs 3,000 ewes and 340 mixed aged cows. The setting of the farm is beautiful and Tu says that from the woolshed you can see all of Tolaga Bay. It’s a busy life for the 23 year-old. With two young children he says he chases sheep by day and changes nappies by night. His short-term goal is to be a stock manager on a large Māori owned farm and be a manager by the time he’s 30. Taane Hubbard, 23, is an experienced shepherd on Caberfeidh Station in the Hakataramea Valley near Kurow northwest of Oamaru. He grew up in Wairoa and in his last three years at secondary school joined a special agricultural academy College (similar to a gateway programme) set up at Wairoa College. This meant spending three days a week doing normal curriculum studies and the other two on local farms. This gave him the chance to see the options the sector offered, and learn skills that would eventually set him on his path to a career in agriculture.

At the Academy he gained level 2 and 3 in Agriculture through Primary ITO. He then worked as a casual farm worker before working briefly at the local freezing works. He then started his study at Taratahi Agriculture training centre completing level 4 and a Massey Diploma in Agriculture before taking a position at Tautane Station in Central Hawke’s Bay working as a shepherd general. After nearly two years, he moved to his current position at Caberfeidh Station. This farm is 6,000 hectares (5,300 effective) and runs up to 17,000 ewes and 550 mixed aged cows.

Taane was a finalist in the 2015 AYMF award along with his partner, Hemoata Kopa.

He says his long-term goal is to be a supervisor or General Manager of a large Māori Incorporation farm with a strong emphasis on helping other rangatahi find a career in agriculture.