Working with owners to rejuvenate the land

We've been working with owners of whenua south of Hastings with the goal of returning their lake back to its former glory.

Lake Poukawa, south of Hastings, sits on the Poukawa 13B whenua. While the majority of the 552-hectare block is used for cropping, the lake still takes up a significant portion of the whenua. The lake and its eel fishery are of great cultural importance to the Te Hauke people and the Ngai Te Rangikoianake hapū. Since the 1930s, the condition of the lake has deteriorated, but we’ve been working with the owners with the goal of returning the lake back to its former glory.

Te Tumu Paeroa Trust Specialist Jo Pleydell has been consulting with the Poukawa 13B Trust in recent years, to help them achieve this.

“The good thing is there’s still quite a bit of life in the lake. But it’s not as good as it used to be,” says Jo.

The lake itself is shallow. It has a maximum depth of less than one metre after it was drained following the 1931 Hawke’s Bay earthquake.

The Māori Trustee has commissioned a report by ecological consultancy company Wildlands, to find out what’s required for the restoration of the wetlands and surrounding land at Lake Poukawa. 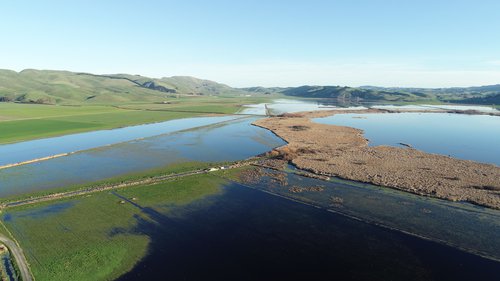 “Wildlands are experts in this field. They’ve been drafting a report that’ll let us and the advisory trustees know what steps need to be taken to get the whenua back to where the owners want it to be. And it’ll also look at the ongoing management of the whenua.”

The trust has played a major role throughout the entire process. The owners and trustees are highly involved in the rejuvenation of their whenua. The owners also have a desire to take over the management of the whenua in the future.

“The Advisory Trustees have been involved every step of the way. We meet with them three or four times a year just because of that work we’re doing around the lake restoration. And they’re very engaged. At a meeting we had recently, over 60 people were in attendance.”

For any future rejuvenation work on the whenua, including replanting – the owners plan to be involved in doing this.

“The understanding is that, when it comes to doing any of the hard work like the planting, the owners want to be involved in that. They’re excited about this piece of work.”